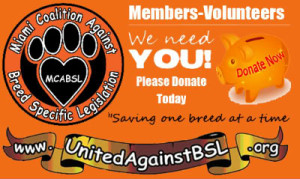 MCABSL needs you! Your dogs need MCABSL! In order for us to continue our successful mission, we must be funded by our charitable members. We simply cannot do it without you… The MCABSL was founded out of the greater need to fight Breed Specific Legislation (BSL), specifically in Miami-Dade County. Since our organization was formed, we successfully challenged for the first time in 20 years a hearing a Pit Bull confiscation case (2008). The outcome hit world wide news…we won! The dog was deemed not to have been a Pit Bull according to the MDAS conformity checklist and the ordinance was deemed too vague. The dog was safe and the owner did not receive the fine. We have had other similar hearings and have been successful. As a direct result of our legal challenges, the conformity checklist has been forced to be modified numerous times. This means that a dog that would have conformed prior to the change, now stands a fighting chance to stay and not conform.

We have spread our wings and have challenged inhumane attempts of passing BSL. In the earlier part of 2010, Florida was threatened by the 1276 Bill. This Bill if passed, would have modified the State Statute prohibiting BSL in Florida. This modification, would have eradicated it’s prohibition and a wave of slaughtering of innocent dogs, thru out Florida, would have taken place. No breed of dogs would have been safe! We were instrumental in this Bill’s defeat! I personally met with the Senators, in the committee scheduled to hear this Bill, and stopped it.

We are there for our members and the general public bringing awareness and education. We deal head on with the Media and keep a constant watch on inaccurate and hyped news. We have rallied against inhumane acts committed on innocent dogs.

Thru our web site (unitedagainstbsl.org), we maintain our members informed. We attend and sponsor events with the intent of bringing about the truth on the real issues and facts of BSL and the numerous banned breeds. We attend different events as guest speakers, bringing the message to those in doubt.

So my dear friends…please support our cause with what ever amount is feasible for you. We have a promise to every dog that has ever fallen victim of BSL and those living in its nightmarish environment, to STOP the killing of innocent dogs, as a direct result of this canine slaughtering! Our motto is “Pit Bulls Are Not The Problem, Irresponsible Owners Are…And We Are The Solution”. Won’t you help?

In Hope and Commitment,

Dahlia Canes
Director for the MCABSL